Oh Lahore, what would you be without your old side?! A bunch of McDonald’s, Pizza Huts and KFC’s? The many Askari’s and DHA’s littered across the city? The true spirit surely lies in Old Lahore…

I fly into the ancient dust that surrounds the old city. My wings recognise the change in the air. I fly.

Burnt bricks, symmetrical walls, wrinkled men and lots of litter. Welcome to Old Lahore. A forgotten past, a faded story, visible ignorance. The walls are smeared with hate and the buildings look down at me. It’s just like any other day.

Along the colourful Vespa scooters that line up the wall of the walled city. Paras watches the alphabets fly off his type-writer. He is the forgotten few, the ignored illiterate, the unlucky uncouth, the poor peasant, the mistreated man. 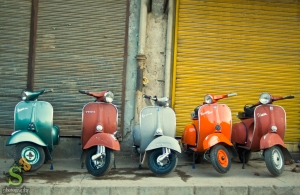 Minutes later, Ashfaq rides into the narrow alley on his tonga. Does anyone need a ride?, he asks. In unison, they all thank him and happily point towards the assortment of motorcycles and cars parked across the road. Jobless!, he laughs to himself. Its back to transporting metal rods for him and his horse.

Susheela hasn’t had much luck either. She ties an ugly hair bun as she lurks along the road to the forbidden area. With summers, business hasn’t been good. Greased musicians tease her as she saunters down the alley, clapping furiously.

The Sitara Steel Band is one of the 300 bands that play at weddings. Band Master Ilyas hopes he that he will be able to fit his entire ensemble onto a noisy CNG rickshaw that seems to be overcharging. His wife says he is constantly out of tune and has been after him to sell his brass instruments as scrap rates. The journey for glory has brought nothing but disrespect. 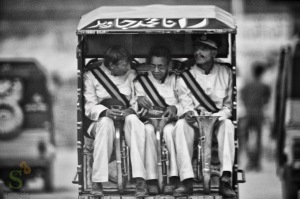 Shakoor is worried. Everyday he needs 45 rupees to buy the cancer sticks he calls soota. He confidently explains that the soota eliminates his hunger for food and is more pleasing. All he worries is about where the next 45 rupees will come from. He says he is a malang, as he doesn’t ask for much, and doesn’t do much either. 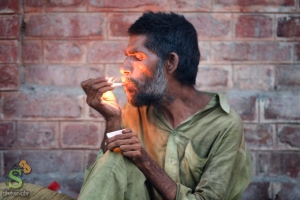 The buildings are embarrassed and speak of unspoken tales. They open their doors in confusion and flap their windows in desperation. That is all that Old Lahore speaks of today, and not the yesterday that at once seemed to be brighter than the tomorrow we do not look forward to…